Racial stereotyping is a system of beliefs about typical characteristics of members of a given racial group, their status, and society and cultural norms. Stereotyping arises out of the need to generalize in order to make sense out of a very complicated environment. It allows people to easily categorize unfamiliar ideas or realizations into comfortable spaces already defined by their experiences. We analyzed how marginalized groups are represented in three different types of media: movies / TV shows, protests / riots, and sports. Through our analysis, we decided to narrow in on these three media avenues because we believe each category builds upon teaching and developing racial stereotypes in society. In turn, we examined how the Social Cognitive theory and priming theory are found within these media’s teachings of roles to society. We used these theories to explain why there are contrasting ways that the media portrays racial groups, and therefore why those representations flow into societal portrayals. For example, media illustrations about protest and riots amongst Whites and Blacks is problematic, and we believe that has much to do with how blacks and whites are portrayed in movies, TV shows, and sports. In each media venue, we found Blacks are commonly referenced as “thugs” who riot and commit acts of violence; while Whites are often portrayed as successful individuals and given excuses for their flaws. We hope to portray this misrepresentation of blacks in the media in order for society to challenge media representations of marginalized groups. 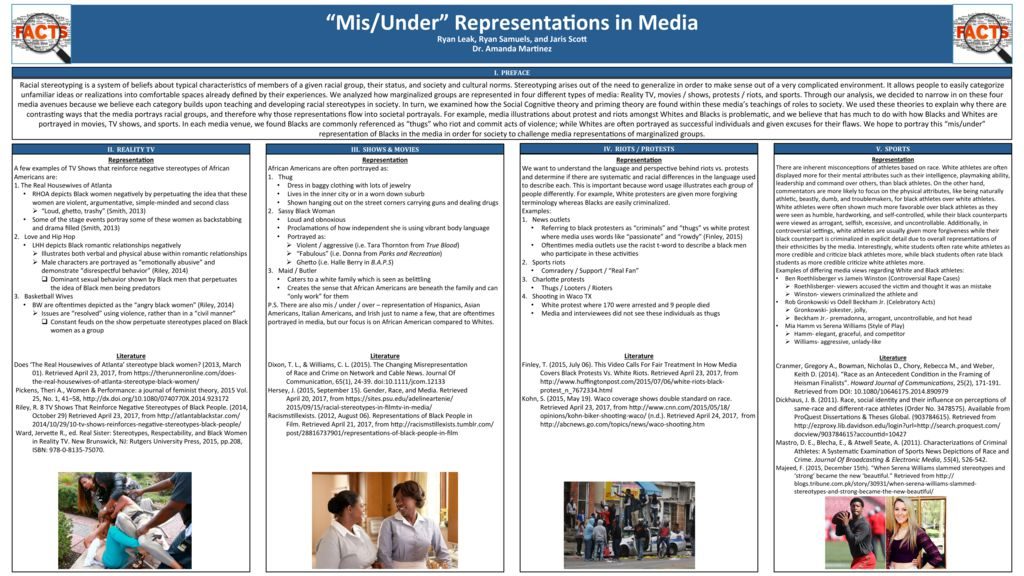