“A Shamrock Could Arise”:
The Southern Cross and the Creation of Irish Identity in Argentina, 1875-1889

Immigrants from Ireland began settling in Argentina as early as 1806, but the Irish community experienced the most dynamic changes during the 1870s and 1880s as economic prosperity and number of immigrants peaked. The Irish immigrants were part of a broader English-speaking immigrant community in the new Argentine Republic, but they created their own distinct community, most evident in Irish Chaplain Patrick Dillon’s founding and publishing of the Southern Cross, a newspaper specifically for the Irish Catholics of Argentina. Because of the relatively small numbers of Irish in Argentina, especially in comparison to immigrants who left Ireland for North America and Australia, few scholars have studied this community, and fewer still have investigated questions of identity and assimilation that are regularly asked of other parts of the Irish diaspora, instead focusing on the economic contributions of the Irish to the growing Argentine Republic. It is my goal to begin to fill this gap in the historiography, and bring the Irish immigrants of Argentina into the larger conversation of the Irish diaspora.
Though viewed as a single cohesive community, the Irish immigrants were socioeconomically and geographically divided between laborers and small sheep farmers living the rural pampas and urban estancieros (large ranch owners) and merchants living in the city of Buenos Aires. The Southern Cross served as an intermediary between the two groups, with its editors emphasizing their shared interests in Argentina and Ireland and a common “Irish” identity to unify the Irish immigrant community. My project investigates the creation and negotiation of a communal “Irish” identity by these different parts of this immigrant group, namely between the urban editors of the Southern Cross and their rurally-based audience. Looking primarily at the Southern Cross, I argue that an attempt to create an Irish identity was based on Irish Catholicism, growing diasporic Irish nationalism and cultural pride that characterized other parts of the Irish diaspora, and an engagement with both Argentine and Irish politics to serve the Irish-Argentine community’s specific interests in both countries. 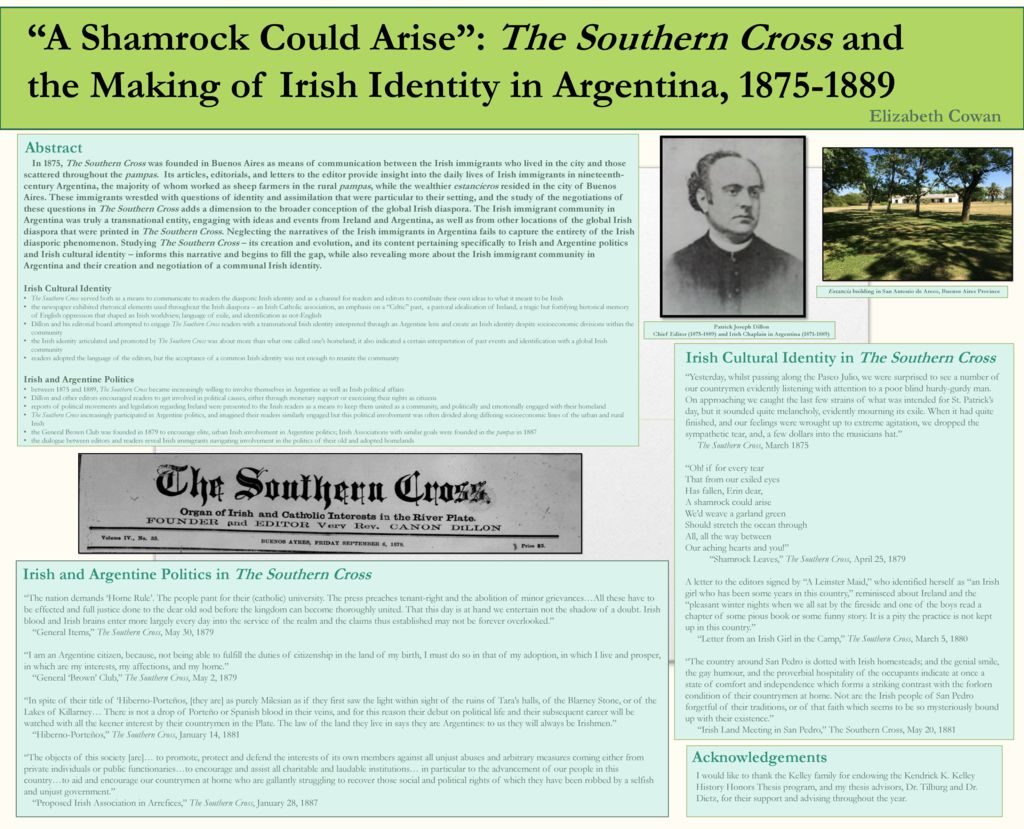